What about Chiangrai as a Thai wedding destination? Chiangrai is the northernmost province of Thailand and snuggles between Myanmar on the north and Laos on the east. Chiangrai is approximately 780 km from central Bangkok and 180 km from Chiang Mai. Chiangrai can be reached by plane through Chiang Rai International Airport or even by bus. It is a long drive from Bangkok though!

Chiangrai is a well known historical town which was built by King Mengrai during 1262. Chiangrai is also well known as being part of the “Golden Triangle” and boasts many attractions for both bride and bridegroom before or after any Thai wedding ceremony.

Chiangrai is a hop away from the Burmese town of Maesai. It also boasts such attractions as the Pu Kaeng Waterfalls, elephant trekking, and white water rafting for the more adventurous.

Over the years Chiangrai has remained relatively unexplored by tourists and still has the feel of innocence, void of all the trappings of a traditional tourist city. If you wish to have your Thai wedding ceremony in Chiangrai with its historic temples and embraced by its tranquil and picturesque mountains, there are many venues to host your Thai wedding. 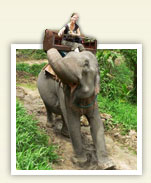 You are only limited by your imagination when holding a Thai wedding ceremony in Chiangrai. Create your memories in un-spoilt beauty with Thai wedding photos which will be the envy of your friends back home.