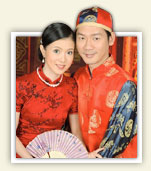 Chinese weddings are famous for its elaborate preparation culminating ironically to a simple wedding ceremony on the wedding day. In Thailand, Chinese wedding remains popular especially among Thai Chinese or Chinese expats.

Preparing for the Wedding Day

Retreating to the Cock Loft
In preparation for her impending departure, the bride-to-be retreats from the ordinary routine and lives in seclusion in a separate part of the house with her closest friends. During this period, the young women sing laments, mourning the bride’s separation from her family and cursing the go-between –; as well as the groom’s family and even the girl’s own parents. Since this extended ‘sleep over’ often takes place in the cock loft, the bride’s emergence on her wedding day is sometimes referred to as “coming out of the cock loft.”

Installing the Bridal Bed
Preparation on the part of the groom involves the installation of the bridal bed on the day before the wedding. A propitious hour and a “good luck woman” or “good luck man”, that is a man or women with many children and living mates, are selected to install a newly purchased bed. (The installation ceremony consists of merely moving the bed slightly; the actual work was done by servants or friends.)

After the bed was in place, children are invited onto the bed as an omen of fertility –; the more, the merrier. For the same reason, the bed is scattered with red dates, oranges, lotus seeds, peanuts, pomegranates and other fruits. Part of the fun is watching the children scramble for the fruit.

Day of the Wedding

The “Hair Dressing” Ritual of the bride and the “Capping” Ritual of the groom symbolize their initiation into adulthood and are important parts of the wedding preparations. Red, symbolic of joy, featured prominently in the clothing and other ritual objects pertaining to the wedding.

The “Hair Dressing” Ritual
At dawn on her wedding day (or the night before), the bride bathes in water infused with pomelo, a variety of grapefruit, to cleanse her of evil influences –; and one suspects as a cosmetic to soften her skin in the manner of contemporary alphahydroxls. She puts on new underclothes and sits before lit dragon-and-phoenix candles.

A “good luck woman” attends the bridal preparations. She speaks auspicious words while dressing the bride’s hair in the style of a married woman.

After her hair was styled, the bride emerges from her retreat. She is carried to the main hall on the back of the ‘good luck’ woman or her most senior sister-in-law. There she dons a jacket and skirt and steps into a pair of red shoes, placed in the center of a sieve. The bride’s face is covered with either a red silk veil or a ‘curtain’ of tassels or beads that hung from the bridal Phoenix crown.

After completing her wedding preparations, the bride bows to her parents and to the ancestral tablets and awaits the arrival of the bridal procession from the groom’s house.

The “Capping” Ritual
Dressed in a long gown, red shoes and a red silk sash with a silk ball on his shoulder, the groom kneels at the family altar while his father places a cap decorated with cypress leaves on his head.

The groom bows first before the tablets of Heaven and Earth and his ancestors, then to his parents and the assembled family members. His father removes the silk ball from the sash and places it on top of the bridal sedan chair.

The Procession from the Groom’s House to Obtain the Bride
The dim of firecrackers, loud gongs and drums marks the start of the procession from the groom’s home. The groom leads the procession accompanied by a child as an omen of his future sons, and the bridal sedan chair followed by attendants with lanterns and banners, musicians, and a ‘dancing’ lion or unicorn. According to Hsiang, “Several decades ago, when there was a wedding in Fukien, the groom would go to the bride’s house to fetch her, taking with him the bridal chair, which was completely covered with red satin and fresh flowers. He himself made the journey there and back in a blue and yellow teak sedan chair. ”

On arriving at the bride’s house, the groom’s party is met by the bride’s friends, who would not ‘surrender ’the bride until they are satisfied by red packets of money, ang pau from the groom’s representative. This is the occasion of much good-natured haggling before the two parties could reach an agreement.

In some cases, the groom would take dinner with the bride’s family, and receive a pair of chopsticks and two wine goblets wrapped in red paper, symbolic of his receiving the joy of the family in the person of their daughter. In some regions, he would be offered sweet longan tea, two hard-boiled eggs in syrup and transparent noodles. Another variation was the groom’s partaking of soup with a soft-boiled egg, the yolk of which he was expected to break, arguably symbolic of breaking the bride’s ties with her family.

The Bride’s Journey to the Groom’s House
The “good luck woman” or a dajin, employed by the bride’s family to look after the bride, carries the bride on her back to the sedan chair. Another attendant might shield the bride with a parasol while a third tossed rice at the sedan chair. Sometimes the bride is borne out in a wooden ‘cage’ with her feet padlocked –; presumably a remnant from rougher times with extremely reluctant brides.

A sieve, shai-tse, which would strain out evil, and a metallic mirror, king, which would reflect light, are suspended at the rear of the bride’s sedan to protect her from evil influence. The bride might also attach a special mirror to her garment, which she would not remove until she was safely seated upon the marriage bed.

Firecrackers are set off to frighten away evil spirits as the bride departed in the sedan chair. The physical movement symbolizes the transfer of the bride from her parent’s family to her husband’s.

Great care is taken to ensure that no inauspicious influence would affect the marriage. The female attendants who escorted the bride to her new home were chosen with particular care that the horoscope animals of their birth years are compatible with that of the bridegroom. The sedan chair itself is heavily curtained to prevent the bride from inadvertently glimpsing an unlucky sight, e.g. a widow, a well, or even a cat. Attendants scattered grain or beans, symbols of fertility, before her.

Arriving at the Groom’s House
Once again, firecrackers are set off just before the procession arrived. A red mat is placed before the sedan chair for the bride lest her feet touch the bare earth as she dismounts. The entire household would be waiting to receive her.

The bride is required to step over a saddle or a lit stove to cross the threshold, since the words for “saddle” and “tranquility” sound the same, ngan, and the fire would cast out of evil influences. An attendant might immediately place a heap of rice in a sieve over or near the bride. If the bride did not wear a lucky mirror, one might be used at this time to flash light upon the bride. In some regions, a grain measure and a string of of copper coins are laid out as talismans of prosperity.

After these rituals took place, the groom could finally raise the red scarf and view the bride’s face.

In contrast to the elaborate preparations, the wedding ceremony itself is simple. The bride and groom are conducted to the family altar, where they pay homage to Heaven and Earth, the family ancestors and the Kitchen God, Tsao-Chün. Tea, generally with two lotus seeds or two red dates in the cup, is offered to the groom’s parents.

Then the bride and groom bow to each other. This completed the marriage ceremony, except in some regions, where both also drink wine from the same goblet, eat sugar molded in the form of a rooster, and partake of the wedding dinner together.

Immediately after the ceremony, the couple is led to the bridal chamber, where both sit on the bed. In some areas, honey and wine are poured into two goblets linked by a red thread. The bride and groom take a few sips and then exchange cups and drink it down. On the day of the wedding (and sometimes for the next three days), the bed chamber is open to visitors, who are given to teasing the young couple with ribald remarks.

Generally, separate wedding feasts are given by the parents of the bride and the groom for their respective friends and families. Even at the feast, men and women sit separately. There could be a single feast for each or a series of feasts over several days. However, the most important feast is that given the groom’s family on the day of the wedding. It is generally considered as public recognition of the union.