Thinking of having a Muslim wedding in Thailand? Muslim weddings are very traditional and unique. The family of the groom would normally seek a bride for the groom. A Thai Muslim wedding could take the form of a traditional Muslim wedding with the performing of the religious rites. This Muslim wedding could then be followed by a non-religious ceremony depending on what is required by the family or the groom himself. This as an example could take the form of having a ceremony on one of Thailand’s pristine beaches such as in Phuket or Hua Hin or even next to a waterfall or any other choice of location in Thailand. Islamic tradition dictates that to perform a Muslim wedding, both parties to the ceremony must be Muslim. Should one of the parties not be Muslim the Imam would have to ordain the non-Muslim in a local mosque into the faith. 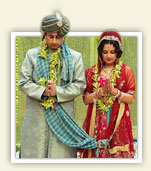 This normally takes the form of the non-Muslim stating that he or she believes in one God and one God only through the teachings of his Prophet Mohammed. If both the bride and the groom are Muslims, the bride has to obtain a letter from her family stating their agreement to the marriage. This letter would be presented to the Imam at the Mosque to fulfill the legal process of the Muslim Wedding.

Weddings are traditionally held at a local Mosque by an Imam with all the family present. The length of time varies but it normally takes 15 minutes or so where the Imam would ask the groom about his love for the bride. The dowry is then presented and a written note is made of it with those present signing it as witnesses. The dowry negotiations takes place before the Muslim wedding sealed and the parents of the bride have to agree. Should none of her parents be present, she can decide for herself before the Imam.

Everyone has to then agree on the religious right and verses from the Holy Koran. This is then read to the groom and he has to repeat it to the Imam while his hand is held and the other hand on the Koran. The Imam then asks the bride if she is in agreement. The wedding papers are then signed. This completes the traditional procedures of a Muslim Wedding.

Contact us today to find out what we can do to make your Muslim wedding a memorable affair.

Get Your Free Legal Guide