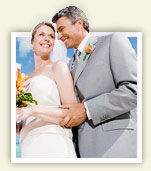 Do you fancy a colorful Traditional Thai wedding, a solemn Christian wedding, a mix of the two which can be done simultaneously, a ceremonious Chinese wedding or a fabulous Muslim wedding? Whatever is your choice, you better read about the types of wedding in Thailand for your guidance.

Often Thai Buddhist weddings are social weddings and the legal papers will be done later on if you need them for any legal purpose.

Wedding Preparation
The day before the wedding during the evening the Buddhist ceremony would commence (วันสุกดิบ). It is during this Buddhist ceremony that the couple has to pay homage to the ancestors of the bride. During this ceremony the couple would wear just their ordinary clothing. There would normally be nine monks present and they would proceed to sit on their straw mats with a bottle of water and a glass before them. The couple would then sit at what would best be described as an altar closest to the first monk. A scared or holy thread is then twirled around the head of the bride and groom and unrolled into the monk’s hand.

Closest to the first monk there would be a bowl of water with a candle inside. It is this holy water that would be used the following day. The first monk holds a special fan in one of his hands. The monks would pray rest and then start to pray again. After this pray they leave and go back to their temple.

Ceremony before the Wedding Day

The following morning, the nine monks would arrive again. This time they will sprinkle the holy water from the day before on those who are present. This time the bride and groom would wear traditional Thai dress for the wedding itself. The couple would now kneel close together and a holy string would again be strung in a circular motion around the head of the bride and then around the head in a circular formation of the groom, joining them. Theye would then proceed to Wai (ไหว้).

There are nine trays each containing small dishes placed before each monk. Prays are said and the couple would then give each monk money. Monks are not allowed to touch money so the money is placed into nine envelopes and handed out. They eat and then go back to the temple. During the retreat season non weddings are held as the monks are not permitted outside of the temple.

Way back then a traditional Thai wedding ceremony would have a “Door Ceremony” where the groom would open the gates on route to the house of the bride. In order to open the gates as each gate the groom had to provide a gift. These gifts become larger the closer the groom gets to the house of the bride. Nowadays the doors are being replaced by girls holding onto a chain. At each part of the chain the person normally the sisters of the bride would ask if he is wealthy enough to care for their sister and family. Each time he would present them with an envelope of money. Each time he passes from one to the other, the audience would cheer.

The “Door Ceremony” is followed by the “Feet Washing Ceremony”. Some of the ceremonies are no longer really practiced. The husband would stand on a chair while the wife would bow at his feet. She would then proceed to wash his feet and wai (ไหว้). This is to symbolize her allegiance and respect of her husband.

During this time the dowry is shown to all the guests. Normally this dowry is returned to the couple after the ceremony and shows only that the groom is financially sound to take care of the family. This would be the normal traditional Thai wedding. Even if the marriage is not registered, those in the village would still view them as husband and wife. As a Westerner you would have to register your marriage for legal and visa application purposes.

The final procedure for a traditional Thai wedding is that the couple kneels on a small pedestal with clasped hands. They would have garlands around their necks and a village elder would say a few words. Each guest would then arrive and pour holy water out of a shell onto their hands and saying a few words. They also hand the couple an envelope filled with money and the couple would reciprocate by handing them a small wedding memento. This lasts for a few hours.